So, in case you haven't noticed, Fat Asian Baby seems to be on an indefinite hiatus, despite the pathetic trickle of posts since we officially announced the demise of this blog. In the meantime, we're moonlighting from time to time over here.

Wait, Is This Ironic?

Oh man. The commentary is all kinds of amazing. Wait for it.

When you have to ask the three year old which way to put on his nighttime diaper, and then he has to show you the correct way to fasten the tabs, which turns out, are velcro. 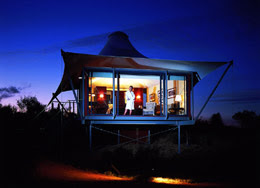 Ladies and Gents, let FAB introduce Glamping*, or, uh, glamorous camping. To us regular folk, that's camping for the ridiculously and stupidly rich (or magic folk). Now you don't have to bother with the pesky task of making s'mores yourself. Glamping comes with a personal chef! And a butler!

"Many people are glamping. I'd say the more sophisticated traveler who wants something different, something a little more meaningful. They want to get back in touch with nature, but they certainly don't want to have to go out hiking in the woods to do it."


For serious! The lady in the video actually said that.

*So, aside from the seriously derisive chuckle this gave us and that disgusting feeling of smug superiority, is any one else irritated by the alarming proliferation of cutesy hybrid names (Hi Brangelina!!) by shamelessly lazy (or cutesy) bloggers and freelancers such as, well, FAB? FAB shall be closely monitoring the outcome of this scientific study.
Indeed.
Like Gridskipper's Chris Mohney , FAB is also partial to the artificial orange yumminess of the original Kraft version and, try as we might, have never really taken to the much-lauded organic Annie's variety, despite enticing shapes such as Bunnies(!) and the like.
And all this talk of mac 'n' cheese reminds us, certain friends of ours are partaking in the Munchy Macaroni 'n' Cheese Fritters at FAB Atlanta fave Agnes & Muriels. Beware, "friends" if you do not bring some of the aforementioned fritters back with you to New York to share with those less fortunate than you, we may have to seriously reevaluate our relationship.

Cats Vs. Galoshes, A Narrative in Pictures 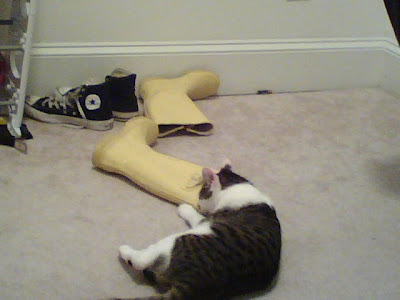 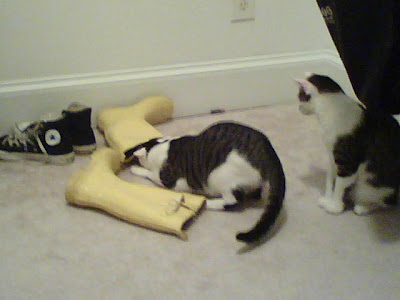 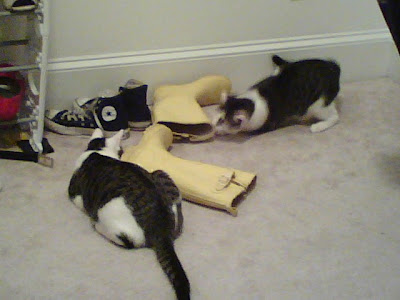 I adopted a cute lil' tempura fetus from Fetusmart! mm..yummy.